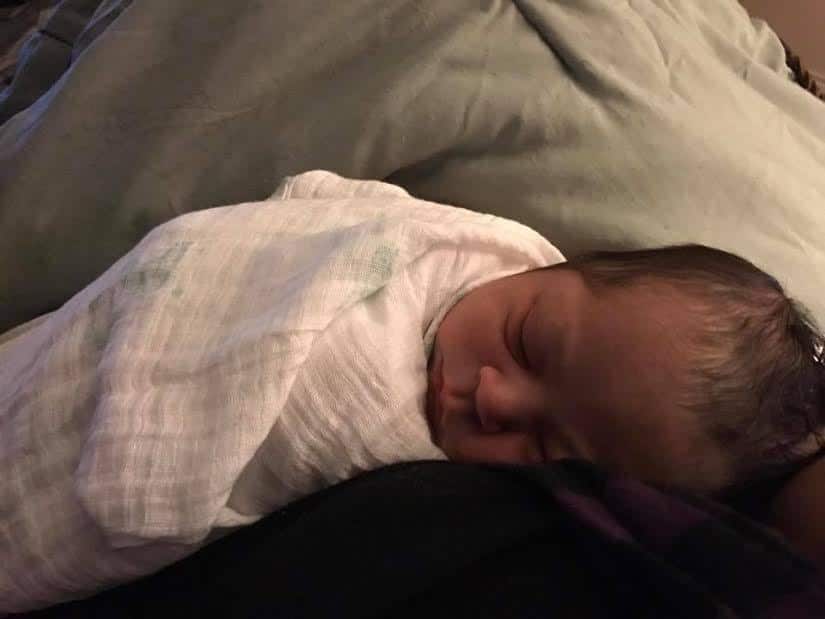 M and M hired me in the first trimester of their second pregnancy.  M had a birth center birth with her first baby, and was looking forward to a home birth with this little one.

The morning of January 5th, two days after M’s “estimated due date”, contractions began.  They woke her around midnight, and intermittently interrupted her sleep through out the night.  M sent me a text around 530am letting me know labor was on its way, and she couldn’t sleep.

All morning things continued to pick up.  Around 10am, M decided she would like to come over a check and see where things were at since her contractions weren’t getting longer or stronger like she was expecting.

M and M arrived at 1120am to my office.  Contractions were coming every 4-5 minutes, 45 seconds long.  Vitals were good.  We were all surprised to find that M was already 7cm dilated, 100% effaced, and baby was at a -1 station!  I could feel a nice, bulgy bag of water in front of the head.

I told M and M to head home, and to go ahead and get the birth pool aired up.  I called my apprentice and assistant and had them start heading that way.

I arrived at M’s house at 1230, finding her sitting on her birth ball.  Contractions were much closer and stronger now, coming every 2-3 minutes, lasting 75 seconds.

Baby sounded great when we listened to heart tones.  Since baby was still liking M’s right side, I suggested doing a set of ten lift and tucks with the rebozo to help baby rotate and descend more into the pelvis.  M agreed, so I helped her through a set of ten while the birth pool finished filling.

The lift and tucks seemed to do the trick as waves of nausea came over M.  We finished the ten lift and tucks in less than 20 minutes.  M was ready for the birth pool, and eagerly got into the warm water just a few minutes after 1pm.

The intensity picked up.  M began alternating her position with every couple contraction waves, intuitively listening to her body and doing what felt right.

M asked M to get into the birth pool with her at 1:11 to squeeze her hips while she labored on her knees.  The intensity kept increasing, and eventually M was laboring on her hands and knees, requesting M to give her counter pressure on her back during contractions.

M told me at 132pm that she was feeling some pressure with the last couple contractions.  I reminded her to let that pressure build until she couldn’t hold it back anymore.

As 2pm neared, M felt like she had a lot of tension in her upper body and moved into a kneeling position, leaning on M for support as she labored.  This changed the way the contractions felt, and M began to spontaneously push at the peaks of contractions.

I did an exam at 211pm and found M to have an anterior lip remaining and baby at a +1 station.  M decided she would like me to hold back the lip while she pushed.  The lip was agreeable, and easily reduced after two contractions.

M continued to push well with each wave.  At 231pm, she moved into semi reclining, leaning against M, due to having several leg cramps.

M’s water broke spontaneously at 234pm.  The head was visible with the next contraction.  The head was crowning at 238pm, birthed at 239pm.  This little guy didn’t want to make it easy on his mama though.  He was coming out with a hand beside his head and wrapped twice in his cord, once around his neck and once around his body.  M eased him out, and I unwrapped him before bringing him out of the water and to M’s waiting arms.  He was here!

Welcome to the world Saavn, born earthside on January 5, 2017 at 240pm, weighing in at 8lbs 4ozs, 19.75 in long!  His big sister O was so very excited to see her little brother!  This sweet mama did an amazing job through her second natural birth, making labor and birth seem so easy!  It was such a privilege to work with this family!