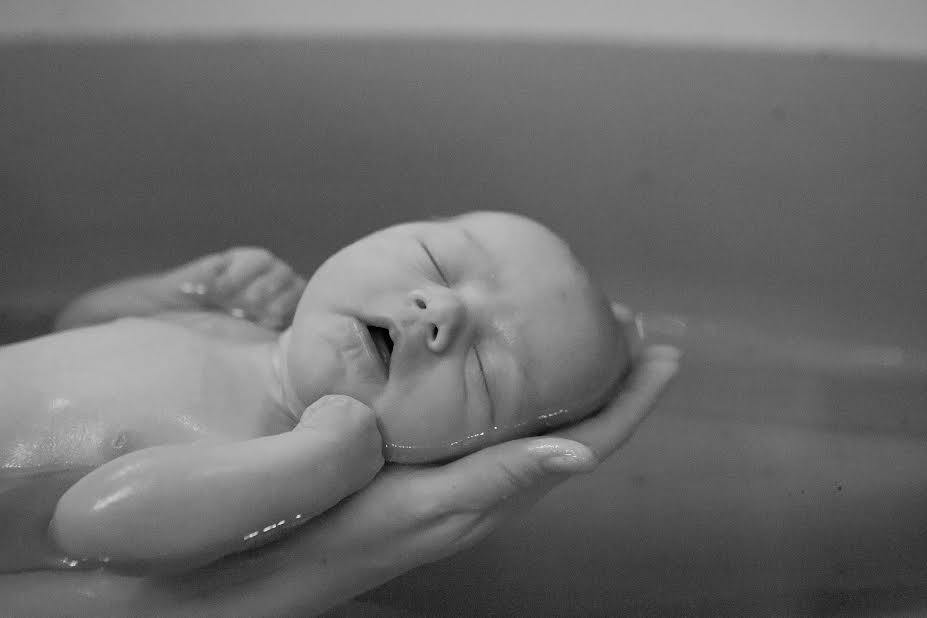 S and S started care with me in the first trimester of their third pregnancy.  Their previous births had occurred at an area birth center where they had a wonderful experience both times.  They were looking forward to experiencing a home birth this time around.

The morning of December 1, S sent me a text saying she was feeling cervical contractions and having bloody show.  Her last birth was a whirlwind one hour labor, which was making S feel very anxious.  She did not want to go through another one hour labor.  I did an exam around 915am, and found her to be 4cm dilated, 60% effaced and baby at a -1 station.  S wanted to get a pedicure, and then felt she wanted me to sweep her membranes and give her some herbs to help control labor to try and avoid a precipitous labor.

I arrived right before 4pm that afternoon.  All vitals were good.  S was 4-5cm dilated, 80% effaced, and baby was at a 0 station.  I swept her membranes, and recommended S walk around her house while she sipped on her labor tea.

It took a couple hours, but soon S was having regular, mild contractions.  They seemed to be coming every 3.5 minutes, lasting 45 seconds.  S labored on her birth ball for a few contractions to give her legs a break.

A little after 6pm, my apprentice R suggested trying lift and tuck to strengthen the contractions and to help baby get further into the pelvis.  She showed S how to do them with S.  S was quite a comedian though, and took his job of keeping everyone laughing seriously.

Contractions picked up after a series of lift and tucks.  They were now coming every 2 minutes, lasting 45 seconds, and appeared to be strengthening in intensity.

After the chiro left, it was time to do another cervical exam.  S was 5-6cm dilated, 90% effaced, and baby was at a 0 station.  I did another membrane sweep to help strengthen contractions.

Through out all her positions, S felt like her contractions seemed most productive when she labored on the toilet.  I encouraged her to go where she felt like it was working the best.

Contractions strengthened on the toilet, but one can only stand sitting on the toilet for so long.  As 9pm neared, S got up and started walking around the house again.

There was a number of people in the house, and the contractions were flowing back and forth in strength, but seemed to be strongest when S was in a quiet area, away from others.  I talked about this with S around 930pm, and she decided to labor again in her bathroom.

Since contractions seemed so much stronger on the toilet, we decided to try sitting on the birth stool and the birth ball and see if those positions provided more comfort but the same intensity.  Unfortunately, only the toilet brought strong, regular contractions.

I had S do another set of ten lift and tucks on S as 10pm neared.  Contractions intensified.  S moved back to the toilet, where contractions began coming on top of each other.  At 1034pm, S asked for an exam on the toilet as she felt things were happening.  I felt she was a good 6cm on the toilet, but hard to tell for sure.

At 1050pm, S decided she felt ready to get into the birth pool.  We walked to the pool.  S had an initial contraction, and then things went quiet.  Thirty minutes later, S decided it was time to get out of the pool and concentrate on the positions that were working.

S moved back to the toilet.  At one point she commented, “It’s not my favorite place to be, but I’m totally grateful that my mother in law cleaned the toilet today.”

Contractions were coming every 3 minutes, lasting 90 seconds.  S was gently moaning with her contractions now.  When she couldn’t handle sitting on the toilet any longer, then we would move and labor on the bed.

She alternated between the bed and toilet a couple times, before settling on the bed.  As 1am was nearing, S was beginning to feel pressure.

A few minutes after 1am, S was grunting at the peaks of the contractions.  She asks for a mirror so that she can watch for the changes.

S told me that she felt like her water was bulging.  We decided I should do a check at 119am, and found S to have just an anterior lip, 100% effaced, and baby at a +2 station.  S decided she would like me to hold back the lip, so we began to push.

The lip quickly reduced.  At 127am, the head appeared on the perineum, quickly followed by crowning, and the birth of the baby.  Sweet girl had a nuchal cord that I easily unlooped over her head, and placed her on her mama’s waiting chest.  She was here!

Welcome to the world Scarlett, born earthside on December 2, 2016 at 127am, weighing in at 6lbs 12ozs, 20.75″ long.  She was welcomed by two excited big brothers who were immediately so in love with their precious baby sister.

It was such a joy to get to be part of this little one’s birthing time.  S was so strong and poised through her peaceful home birth journey.