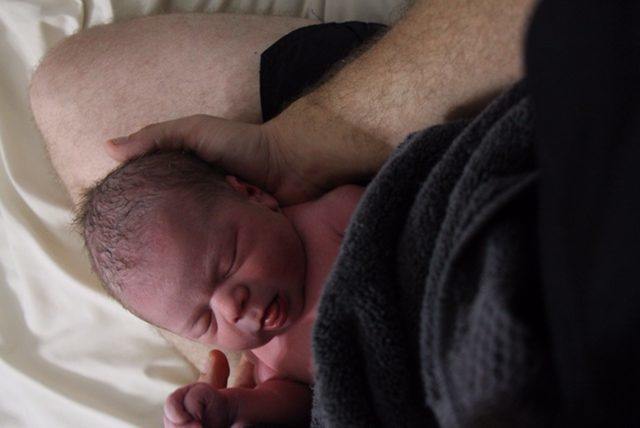 D and T started care with me in the first trimester of their first pregnancy.  D was super excited about her pregnancy and planning her home birth.

At 38.6 weeks is when D entered her birthing time.  T came home at 3am that morning from work.  D had been asleep.  Contractions woke D at 330am, that immediately started coming every 2 minutes, lasting 20-30 seconds and D was having some bloody show.  T updated me with this info around 430am.  I recommended eating, hydrating, bath, and rest and reviewed when I would come.

T sent a text at 635am saying contractions were now coming every 2 minutes lasting over a minute for an hour.  We decided I would head their way at about 8am, however things changed.  T texted at 7am saying D was starting to feel a lot of pressure and wanted to push.

My husband started rushing back home from his meeting, and I darted out the door to get to T and D and see what was up.

I arrived at 744am and found D laboring on her left side in bed.  Since she was feeling so much pressure, I started vitals with an exam.  D was 4cm dilated, 100% effaced, and baby at a 0 station.  I could feel a bulgy bag of water.  I also noted cervical scaring on her cervix.  I attempted to massage the scar tissue, but D felt it was too uncomfortable.

D moved to laboring on her knees in the bed.  Contractions were coming every 2-2.5 minutes, 60-75 seconds in length.  My birth assistant arrived and began to set up the pool.

I talked to D about trying open knee chest to get the baby away from putting so much pressure.  I got her into position at 815am, and talked to her about staying in that position for about 40 minutes.  I sent a text to D’s chiro, and she agreed to head that way as well to adjust her.

D’s chiro Nora arrived at 915am to adjust her.  She worked on her, and D felt some relief.  D was beyond ready for the birth pool, which was now filled enough and ready.  D got into the birth pool at 930am, and alternated laboring on her knees and semi reclining.

Contractions were coming every 2.5-3 minutes, lasting 60-75 seconds in length.  D was moaning with contractions, and said there was so much pressure.  Different members of the birth team alternated providing hip squeezes and counter pressure.  I began giving D an herbal tincture to help with coping.

T soon got into the pool with D, and was able to help with counter pressure and massage to help D stay comfortable.

D wanted an exam at 1130am.  I found her to be 7cm dilated, 100% effaced, and baby at a 0 station.  I found that part of her cervix felt more swollen than the other side.  I recommended doing a set of ten lift and tucks with the rebozo to help baby sit more evenly on the cervix.  T did the lift and tucks, and D handled them like a champ!  She was so strong!  Contractions were coming every 2-2.5 minutes, lasting 75 seconds long.

The pressure was building, and D was moaning with contractions.  We surrounded her with support and encouragement as she perfectly listened to her body to allow her body and baby to work together.

D had an anterior lip and baby at a +1 station at 125pm.  D said it hurt too much for me to reduce her lip, so we encouraged D to blow through a few contractions until she couldn’t blow through them anymore.

D’s water broke a moment later, and the pressure changed.  D began to bear down at the peaks for a few contractions, before spontaneously beginning to push at 140pm.  She was now 10cm dilated, and baby was at a +2 station.

D was feeling tired, and we decided to try tug of war with the rebozo to give D some extra strength to get baby under the pubic bone.  My apprentice A did tug of war with D with contractions, and it worked so well!

Right before 2pm, baby was at a +3.  D was pushing so well!  T assisted D in getting into a supported squat to help with pushing, while D and A continued to do tug of war.

D’s mom and sister were brought into the room for delivery as D wanted.  The head was sitting on the perineum at 203pm, and began crowning a minute later.  I talked D through the pressure she was feeling, and she delivered the head smoothly at 205pm.

The baby had a nuchal cord, that I somersaulted the baby out of as he was born a minute later.  He was here!

This first time mama completely rocked her intense labor journey.  I am so honored to have been part of her sacred journey.  #sacredjourneymidwifery