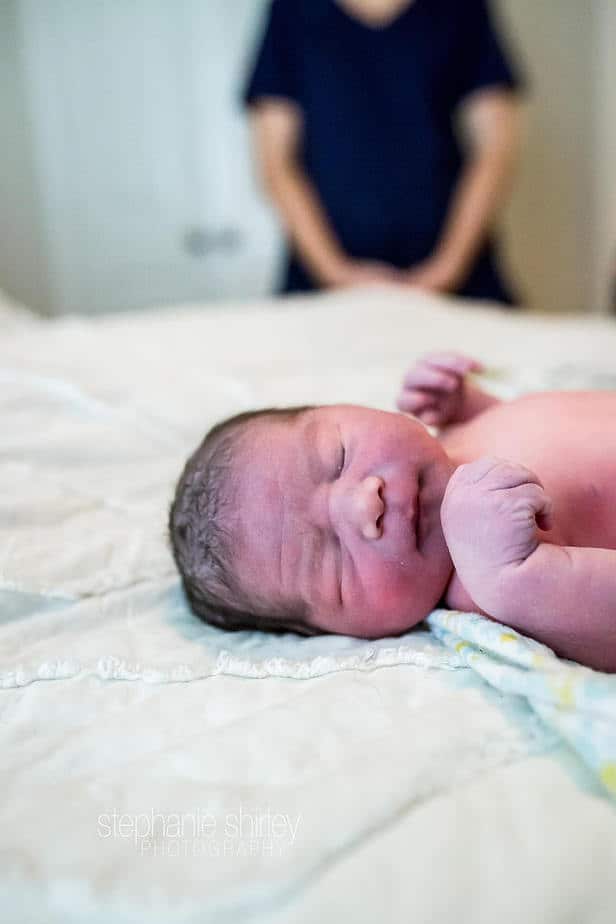 S and D started care with me in the first trimester of her second pregnancy.  S’s first baby was a surgical birth, and she was excited to have her healing VBAC (vaginal birth after cesarean).

Around 5am on August 5th, S sent me a text letting me know she had been having regular contractions since 2am, as well as was experiencing bloody show.  I recommended she eat a good breakfast, stay hydrated, and try to take a warm, and then let me know how things felt.

Contractions began to pick up after the bath.  I headed out, arriving around 850am.

I walked in and found S laboring in her kitchen, breathing well through contractions.  The first thing out of her mouth was to inform me of something funny her husband had been doing that morning, which continued to cause her to burst into laughter all morning.

Vitals were complete, and we moved to the bedroom to do an exam at 905am.  S had some cervical scarring that she let me massage out like a champ.  The rigidity immediately broke up so well on my fingers.  S was 7cm dilated, 100% effaced, and baby was at a 0 station.

The birth pool was being filled for S to use.  S sat on her birth ball, laboring through contractions.  Her contractions were coming about every 90 seconds, lasting 45 seconds.

S was having a hard time finding a comfortable position while she waited for the pool. She alternated sitting on the ball, with walking around her home, leaning on D for support with contractions.

The pool was filled and ready for S at 10am.  Later, S and D told me that they had no idea how soon Thomas would be born after getting into the pool.  S got into the pool, and sat semi reclining.  She labored beautifully through each labor wave.

Through out what was transition, S kept talking and talking about how much she wanted to eat a warm, glazed donut.  She wanted one badly.  We encouraged her that certainly someone could get her a donut after she was holding her sweet boy.

S was feeling the urge to push at the peaks of contractions at 1014am.  I encouraged  S to wait for the urge to become unbearable.  S continued to blow the urge away.

I encouraged S to feel for her baby.  At 1026am, S said she could feel her baby’s head inside when she checked.  The pushing pressure was increasing.  S asked me to check at 1029am.  She had an anterior lip, and baby was at a +2 station.

I talked with S about her options, and she requested for me to hold back her lip.  It took two contractions, and the lip was over the baby’s head.

We could see the head on the perineum at 1048am.  S looked at me and said she didn’t want to push anymore, it was burning too bad.  I encouraged S to feel her baby, and let him stretch things.

With each contraction, S pushed a little more of her baby’s head out.  She felt his head, as more and more was becoming visible on her perineum.  She helped guide his head out gently into her awaiting hand at 1053am.

Then his head was born, and we waited.  This little guy was born in a bit of a funky position, which unfortunately caused his shoulders to lock under the pubic bone.We tried to do a couple maneuvers with S in her semi reclining position but it wasn’t working.

I had the birth team assist me in flipping S onto her hands and knees.  S continued to listen to me as we worked together to guide her baby out.  We pulled one of her legs in runner’s position, and I was able to get a shoulder out.  Seconds later, Thomas was born into my hands at 1055am.

He was a little shell shocked from his delivery, so we gave a few puffs with the bag and mask, and he let out a cry.

His mama did an incredible job bringing him earth side, getting her gentle, healing VBAC she desired.

S continued to talk about that warm glazed donut, so after the placenta was delivered,

D ran over to the donut shop and bought a couple dozen donuts as S’s reward.

It was such a joy and privelege to serve this sweet family through this journey.  S totally rocked her HBAC!