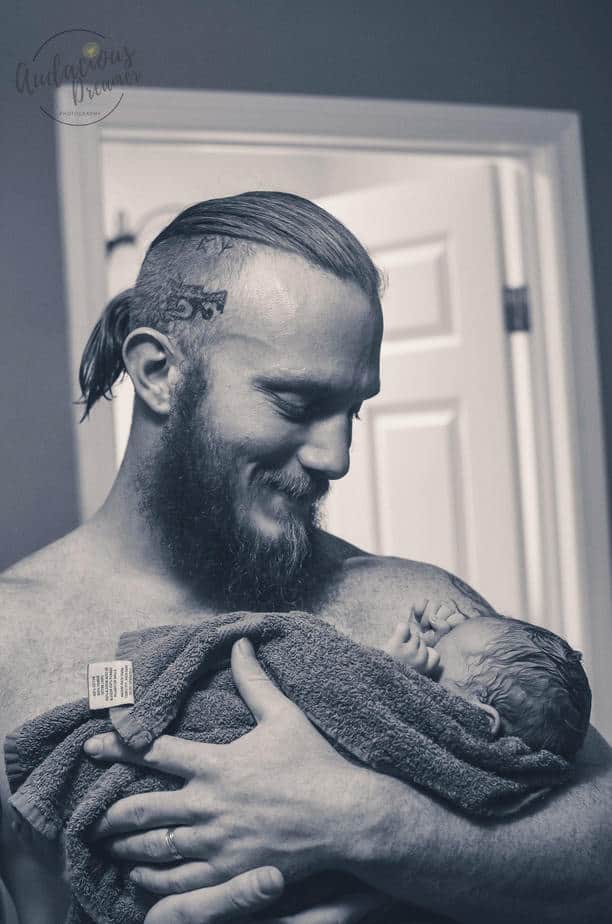 G and E started care with me at the end of the second trimester of G’s fourth pregnancy.  G’s sister in law had a home birth with me, and G was looking forward to her experience.

G experienced lots of prodromal labor in those last weeks leading up to her due date.  At 39.1, G came over for a membrane sweep and some herbs to see if it would help her body get an active labor pattern.  She had contractions over the last 24 hours that were different, but not changing too much.  G was 5cm dilated, 70% effaced, and baby at a -1 station.  G drank the herbal tea blend I made, and I recommend she eat, walk, and keep me posted.

G came back over around 4:40pm for another sweep and tea.  She had contractions through out the day ranging 3-7 minutes apart, and building in intensity.  G was now 6-7cm dilated, 80% effaced, and baby at a -1 station.  I discussed with G about the possibility of active labor going quick, and to keep me well updated.

G asked me to come at 7pm, since contractions were shifting and were coming stronger and closer.

I arrived right before 8pm, and found G sitting on her birth ball.  Vitals were good.  I did an exam and G was 7cm dilated, 90% effaced and baby was at a 0 station.  I recommended doing lift and tuck with the rebozo x10 contractions to help baby’s position.  G agreed.  Contractions became much closer and stronger with the lift and tuck, coming every 3 minutes, lasting 45 seconds long.

E thought this position was a lot of fun, and helped G through it.  E kept making a lot of jokes during this time, and we were all busting out laughing!

G was feeling things much more intensely as 10pm neared.  She tried laboring on her hands and knees for a few minutes, before getting back up and moving.  I suggested that we try the lift and tuck for one more set, and then get into the waiting birth pool.  G agreed, joking that the lift and tuck didn’t make things hurt that bad.

Well this set of lift and tuck was much different.  Each contraction shifted, and became more powerful.  E was at her side, encouraging her, while I did the lift and tuck and encouraged G from behind.  Emotions were high when the last lift and tuck of the series was complete.  G immediately went towards the birth pool.

G got into the birth pool right after 11pm, laboring on her knees.  G says she is feeling pressure. I encouraged G to let that pressure build until she can’t hold it back anymore. Contractions were coming every 2.5-3 minutes, lasting 75 seconds long.

E gets into the pool, and G moves into semi reclining against E at 11:08pm.  The pressure was building, and at 11:11pm, G began to spontaneously push with contractions.

I found G had a cervical lip at 11:19pm.  I encouraged G to blow through a few contractions until her body began taking over the pushing.

The urge to push changed, and G began to push again at 11:30pm.  Things moved quickly from there.  Her water broke with the birth of the head a minute later, followed by the baby a minute after that.  He was here!

It was such a privelege to help this couple through their first home birth.  Looking forward to the next journey.  #sacredjourneymidwifery

Photos taken by Kristyn Cuevas of The Audacious Dreamer.