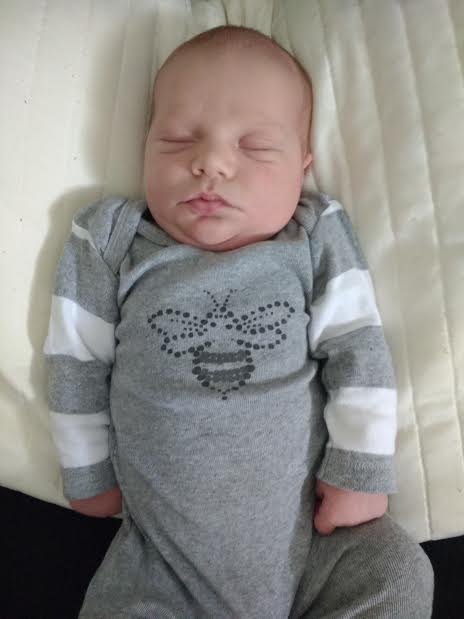 A and H started care with me in the second trimester of their second pregnancy.  They had used me for their first pregnancy and birth two years prior, and were looking forward to another home birth.  You can  read about their first birth here.

A’s first baby came on her due date, so A was hoping for the same this time around.  A’s due date came and went.  I saw her for her regular weekly appointment and found that her baby was in a ROP (right occiput posterior) position, a less than ideal position for labor.  We talked over different positions to try to encourage baby to rotate and scheduled A an appointment for in six days when she would be 41 weeks if it was needed.

Two days later A asked if she could come by for a membrane sweep and to encourage labor.  A and H came by that evening.  She was 4-5cm dilated, 70% effaced and baby was at a -1 station, and still in a ROP position.  I swept her membranes, and gave her a drink of red raspberry leaf tea and black and blue cohosh.

I did an exam around 235pm and found A to be 7cm dilated, 100% effaced and baby at a -1 station.  I swept her membranes again to help intensify the waves.  We were all happy to find that baby had done a complete rotation through all those contractions and was now in a LOA (left occiput anterior) position.

After the exam, I encouraged A and H to do the abdominal lift and tuck with the rebozo for ten contractions.  Within a few of the lift and tucks, the contractions intensified.  H asked if a forward leaning inversion would be helpful at this point, and I said it definitely would.  I recommended doing it through one contraction, but A was such a trooper that she did it through three contractions.

A did great staying hydrated and nourished.  My apprentice arrived a little after 5pm, and I suggested another round of ten of the abdominal lift and tuck since it changed the way the contractions felt earlier.  This definitely changed things yet again, as the waves began coming every 2.5-3 minutes, lasting 90-110 seconds in length.

A was tired of being on her feet and as 6pm came, she decided to try and sit to rest her feet and eat a sandwich.  Contractions spaced to 6 minutes apart, and we all decided activity was going to have to be balanced with rest.  A walked around the house, squatting through a few contractions.

We did an exam at 640pm and found A’s cervix to be 8cm dilated, 100% effaced and baby at a 0 station.  Her cervix was super stretchy and the baby was in a straight OA position.  In A’s last birth, she stalled at 8cm for many hours, so we were all hoping to avoid that again, for A’s sake!

A alternated walking around the house with sitting during the labor waves for awhile.  She became more vocal and felt like she could feel some in her bottom with some waves.  Contractions were coming every 3 minutes, lasting 55 seconds.

A decided to labor in the shower for a few while we finished filling the birth pool.

At 805pm the pool was ready and A got right in.  She enjoyed the warm water and the relaxation it brought.  H and their toddler E also got into the pool and helped support A through the waves.  Through out the next hour, we noticed the contractions were definitely strong, but spacing out to every 5-7 minutes, lasting a minute or so in length.

As 10pm neared, I started talking to A about considering an exam to see what was going on.  She agreed and I did an exam and found there had been no change.  A had stalled for quite awhile at 8cm last time, and did not want to repeat that.  After discussing risks and benefits, A and H decided they would like for me to break her water.

A got out of the tub to labor on the toilet for a couple waves, before coming to the bed for me to break her water.  Often a contraction is needed to snag the bag of waters.  A was nervous because of what she remembered from last time, and it took close to 15 minutes for a wave to come.  Once it came, I broke her bag.  Water was clear and baby sounded great with his cushion taken away from him.

A decided to labor outside the tub for a few contractions.  She rocked on the birth ball, moaning with her waves.  The waves were very much stronger now, coming every 3 minutes.

At 11pm, A moved to labor in the shower while sitting on her birth ball.  Her moaning was sounding more primal and I could tell birth was near.  A moved into the birth pool at 1119pm and got into her hands and knees.  She told me she was starting to feel pushy.  The next wave, she began to spontaneously push.

It didn’t take long at all and we could see the head on the perineum.  The baby began to crown at 1129pm, followed by the head a minute later.  We discovered with the head that the baby was coming with a nuchal hand.  A eased the head and hand out, and minute later the rest of the baby was here.