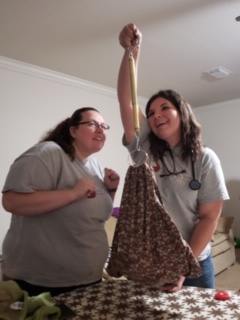 L and P started care with me in the first trimester of her fifth pregnancy.  This was to be L’s third home birth with me.  You can read about her previous journeys here and here.

L’s pregnancy progressed along normally.  L’s previously had delivered about her estimated due date, and we assumed that this little one would follow suit.  However, she had her own idea about things.

L’s due date of October 16th came and went. Her weekly appointment was scheduled for three days later.  Everything was feeling normal.  L requested a cervical exam.  L was a finger tip dilated, 50% effaced, and baby at a -4 station.  I recommended some different positioning techniques to try, and to get an adjustment from her chiropractor.

L sent me a text the morning of October 22nd, 6 days passed her estimated due date, letting me know she felt sure she was in labor.  Her contractions stayed irregular all day.  She was able to get an adjustment in the early evening, and decided to come see me after for an exam and membrane sweep.

L arrived at about 630pm.  I did an exam and found her to be 5cm dilated, 100% effaced, and baby at a -1 station. I recommended L eat a good dinner and attempt a nap if possible, as it seemed likely she would be meeting her baby some time the next day.

Things picked up around 730pm, and no nap was to be had.  L asked me to come at 1145pm, stating contractions were 2-6 minutes apart and very strong.

All mom and baby vitals were good.  I began to encourage fluids since L’s pulse was borderline.

L labored around her bedroom, standing at her bedside sometimes having counter pressure with contractions.  She labored some on the toilet, and some sitting on her bed.  Everything was uncomfortable as she pushed forward further into her journey.

As 2am neared, L tried laying on her sides to get some rest in between  contractions, but it was short lived.  She felt the urge to change positions frequently, and did beautifully following her bodies lead in what she should do.

L moved into hands and knees on the bed at 230am, and we applied some oils to her back to help with back pain.  In that position, things began to change.  It was not long, and L said she felt like she was feeling burning.

A couple more contractions passed, and L felt like she wanted to push, but wanted an exam first.  I did an exam at 308am, and found L to be 9.5cm, 100% effaced, and baby at a +1 station.  I recommended she blow through a few contractions while waiting for the last half centimeter to melt away.

Big sister T had been sound asleep through everything, but woke about this point.  She was so sweet and precious, and was being a sweet doula to her mama through the end of labor.

L moved to the toilet to empty her bladder and labor at 315am.  After that, she felt tired.  She moved to laying on her left side in her bed at 338am.

At 348am, L began to do tug of war pushing with the rebozo with birth assistant, H.  It worked very effectively.  We could see the head with pushing as 4am neared.  The head began to crown at 403am, followed by the head a minute later, allowing time for things to stretch.  A moment later at 405am, L pushed her fifth baby into mine and my senior apprentice’s waiting hands.  Her sweet girl was here!

Big sister T fell immediately in love with her baby sister.  She was so precious with how she spoke of her sister, and how she wanted to help us with everything postpartum.  She is definitely a protective big sister!

It was a blessing to work with this sweet mama for a third time.  One of the best parts of being a midwife is walking the journey with a family more than once.  I treasure each journey.