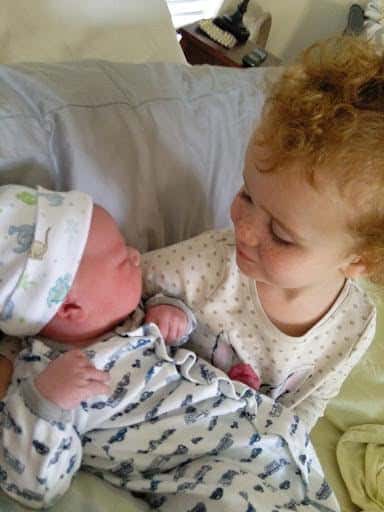 S and J started care with me in the first trimester of their sixth pregnancy.  S had her previous babies at home with midwives in different states.

S came in for her weekly appointment at 40.6 weeks and stated the baby had been moving less, and she would feel better if we did a membrane sweep to see if we could nudge baby out.  I did a cervical check and found her cervix to be 3cm dilated, 80% effaced, and baby at a -2 station.  I swept her membranes, and was hopeful I would hear from her soon in labor.

At 2am on February 1, 2017, S sent me a text saying her contractions had woke her up around 1230am and were coming every 3-5 minutes, lasting 45-60 seconds long.  She had started feeling stronger contractions at 10pm, but was able to get some sleep.  She was going to try a shower, and let me know shortly how she was feeling, and when I should come.

S sent a follow up text at 255am saying the contractions were definitely painful and she did not want to time anymore.  I told her I was on my way!

I walked in at 330am, and found S laboring on her knees in the birth pool.  Contractions were intense, and S was grunting at the peaks.  I knew we weren’t far away from having a baby.  Contractions were coming every 2-2.5 minutes, lasting 45 seconds.

I quickly began setting up for delivery, knowing I didn’t have much time to be ready.

S began to spontaneously push at 354am.  I felt an anterior lip that S was quickly able to push through.

A minute later, S’s water broke spontaneously.  Things moved quickly from there.  The head was birthed at 358am, followed by the rest of the sweet boy a minute later.  The sweetest sight was to see all five of the older children so completely excited, standing over the birth pool in awe at their sweet baby brother.

Welcome to the world John Martin, born earthside on February 1, 2017 at 359am, weighing in at a whopping 9lbs 14ozs, 21″ long.  It was such a blessing to serve this family through their journey welcoming their sixth blessing into the world.