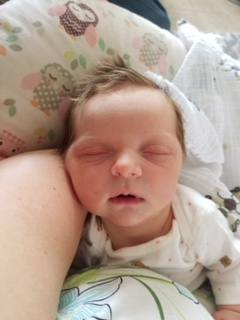 E and I started care with me in the first trimester of their second pregnancy.  E had planned a birth center birth with her first, but had a very long, hard labor and delivered in the hospital.  She was hoping for a different experience for this journey.  We just did not know how opposite the journey would be!

E’s pregnancy progressed beautifully.  E had her first baby on her due date, so we anticipated a similar timing for this baby.

Six days passed her estimated due date, Houston was hit with an ice storm.  I told E to take it easy until the roads were more passable.  E had originally wanted to come in that day for a membrane sweep, but until the weather improved, we waited things out.

Eight days passed her due date, little one was still enjoy like in the womb.  E came over that morning a little after 9am for her regular appointment plus a membrane sweep.  She had been having a lot of prodromal labor over the last 7-10 days, so we were hopeful the sweep would work.  E’s cervix was 3cm dilated, 80% effaced, and baby was at a -2 station.  I talked to E and I about going for a walk when they got home, and to keep me updated.

E stated she felt that regular contractions began at 10am.  By time she made it home, things were feeling more intense, and the thought of a walk did not sound super enticing.  She had some bloody show a little after 11am, and sent her contraction timer, which showed contractions 2 minutes apart, lasting 40-45 seconds long.  E said they were definitely feeling more painful.

I sent me a text at 1216pm, stating contractions were giving E some cervical pressure and seemed strong but were short, about 30 seconds long.  I asked him if she felt close to me coming, and he said take your time but start heading this way.  I said I would finish my lunch, then be on my way.

I was about to head out when I sent a text at 1241pm, letting me know that he was beginning to fill the pool because contractions were suddenly more intense.

As I was pulling out of my driveway at 1245pm, I sent a text saying E is having a strong urge to push, and he is trying to get her to focus on breathing.  However, two minutes later her water broke, and I knew I would not be making it in time!  I sent a text to a midwife who lived closer, but she was unavailable.

E was reclining in her bath tub, and the urge to push over came her.  In minutes, her sweet baby was born at 1250pm.  I said later that the cord was around the neck, and he swiftly undid that, and they suctioned the baby with the nose frida.  I called in and talked through what to do and check, and requested to send me a video or picture since they were unsure if the baby’s color was okay.  Both myself and my birth assistant were flying down 99, trying to get there!

Welcome to the world Margo, born earthside very fast and furious on January 18th, 2018 at 1250pm, weighing in at 8lbs 2ozs, 19.5 inches long.  Margo is so loved by her big sister C.  It was a joy to help this family through their journey welcoming their second baby earthside!