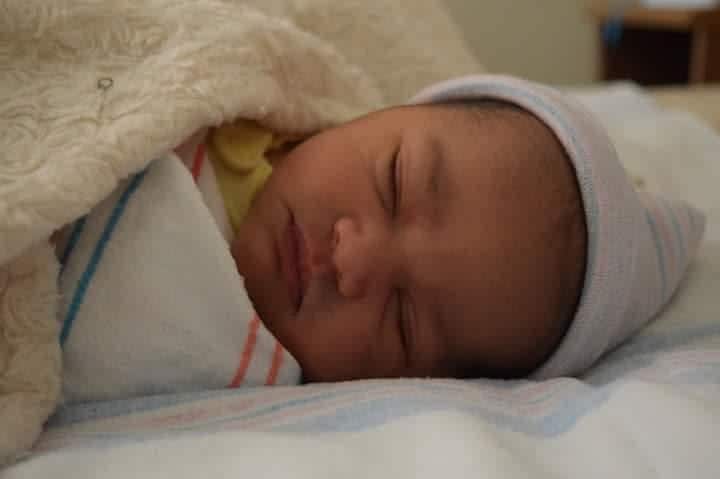 F’s pregnancy was complicated with anemia, which was expected based on her previous pregnancy history.  F was diligent with supplements and was able to keep her levels where we needed them to be to have a home birth.

F has a pretty predictable labor and birth history.  When the sun goes down the evening of her due date, labor commences.  This experience starts just like the rest, but with many more twists and turns.

Based on F’s previous labor history and precipitous deliveries, the plan was made for me to arrive soon after regular contractions were noted.  J called me a little after 8pm on November 17th (F’s EDD) letting me know that they had gone for a walk and contractions were coming every 2 minutes, lasting 45 seconds.  I got ready to go to head that way, expecting a baby well before midnight if we were basing it on past history!

I arrived right before 9pm to find F walking around the house.  Her pulse was up, so F hydrated and it cam down.  I did an exam at 910pm and found F to be 3cm dilated, 70% effaced and baby at a -3 station.  F has a tremendous diastsis recti separation that causes her belly to be quite pendulous so the cervical findings were no surprise.  We already knew what positioning techniques we would need to do.

I wrapped F’s belly to help put him more on her cervix, then F and J went outside for a walk to see if it would intensify the contractions.

F and J came back in around 10pm.  F labored on the birth ball while sipping on water and gatorade.  F found herself walking around her dark bathroom with J, contractions coming every 2-3 minutes, lasting 60 seconds long.

F was feeling tired and decided to labor on her left side in her bed as 11pm neared.  When I came in to listen to the baby at 1130pm, F told me she felt like the contractions weren’t productive and it seemed like baby couldn’t quite get into the pelvis.  I did an exam per F’s request and found her to be 4cm dilated but otherwise the same.  Baby was definitely still hanging out pretty high in the pelvis.

F got out of bed, and I did the abdominal lift and tuck using the rebozo for ten contractions.  J stood in front of F, helping to keep her focused through the labor waves.  I gave F a homeopathic to help strengthen the contractions due to weak abdominal tone.  Although stronger, contractions were coming every 5-6 minutes, lasting 60 seconds.

After the lift and tuck, F got into the bed in semi reclining to rest and also help baby to get more into the pelvis since her abdomen was pendulous.  I told F we would try this for awhile then move on to another position.

I continued to dose F every 15 minutes with the homeopathic that helps weak abdominal tone as it seemed to be strengthening the contractions.  At 117am, F was ready for the next maneuver so we went to the room with the highest bed and tried walcher’s maneuver for three contractions to help get baby’s head in the pelvis.  F was such a trooper through this very uncomfortable position.

F ate a snack, before wrapping her belly and going out for another walk with J.  After the walk, F said she felt the contractions were much stronger and that we were moving in the right direction.  She requested for J to do another round of lift and tuck with the rebozo during contractions.

Contractions began coming every 3 minutes, lasting close to 90 seconds long.  When F began to feel tired, she moved to semi reclining in the bed to continue to help baby navigate her pelvis with the pendulous abdomen.  I would come in and listen to the baby periodically, but encouraged F to rest awhile to build up her energy.

I did the next exam at 4am.  There had been a good amount of cervical change since the previous exam.  F was now 5cm dilated, 100% effaced and baby had moved down to a -1 station.  F was feeling very emotional as this labor had already taken longer than her first two combined.  I encouraged F to get up and eat and hydrate and also told her we have options to help move things along further if she wanted to help baby further engage.  Contractions were staying nice and strong now.

F moved back to her bed around 515am and stayed there for almost two hours, reclining back.  The contractions intensified.  F quietly told me while listening to the baby that she was feeling rectal pressure at the peak of the contractions.

F got up around 7pm and walked around the living room, telling us that she no longer could rest in between contractions as they were now coming every 2.5 minutes, lasting 75 seconds long.  My apprentice R did another set of lift and tuck with F.

I did an exam at 8am and found F to be about the same, but baby had moved to a 0 station and I felt a very bulgy bag of water.  I told F that earlier I just mentioned the idea, but now I strongly recommend considering breaking the water to help  move things along.  In hind sight, I wish I had encouraged it more strongly earlier.  We reviewed risks and benefits and F decided to have me break her water.  I broke F’s water at 810am and her cervix opened to 6cm.  The birth team finished filling the birth pool so that it would be ready for F, as we expected her to need it soon.

F got into the birth pool close to 830am, laboring on her knees.  F said the contractions were significantly stronger since breaking her water.

I noticed the contractions spaced immensely in the water as 9am came, coming every 5-7 minutes, lasting 120 seconds.  I recommend F to stay in neutral positions and lift belly or recline to continue to keep baby moving down and avoiding the pendulous abdomen.

At 930am, F was 8cm dilated, 100% effaced and baby at a +1 station with a thick anterior lip.  I recommended F alternating side lunges for three contractions to help give baby room to rotate.

F was feeling really tired and her energy was depleting.  We were so close to the end that I was hoping to keep her energized enough to have her baby.  We continued to hydrate F between contractions and fed her a sugary energy pack to give her an energy boost.

F told us she felt weak around 10am, so J and I moved her from the pool into semi reclining in the bed.  Her vitals were perfect.  I did an exam and found her to be 9cm, and asked F to push with the next contraction.  Most of the cervix moved over the baby’s head, so we began to push at 1011am.

In between contractions, someone would push juice and water into F to help keep her energized.  She would lay back and close her eyes in between.  Around 1030am, my assistant H began doing tug of war with F to help F strengthen her pushes.  She had a thin anterior lip at this point.

At 1040am, I whispered to H to go ahead and write down all of F’s information in case of transport.  F has a history of postpartum hemorrhage and her body was so tired, I wanted to be prepared to transport if I couldn’t manage the blood loss with what I had at home.

Twenty seconds into the contraction at 1049am, F went limp and passed out, unable to respond to us.  R used ammonia to help F become more responsive while H called 911.  F’s vitals were great as were the baby’s, but it seemed that F’s body was just too tired to continue.

The ambulance arrived, and F and I were loaded and on the road 1059am.  All vitals were normal, and I continued to monitor the baby during transport, his heart beat staying strong in the 130s.

We arrived at the hospital at 1120am and were taken to the emergency room triage.  I helped the nurse find the heartbeat and the doctor confirmed delivery was imminent and we moved to labor and delivery.

F was in labor and delivery triage at 1132am and was blessed with a very phenomenal OB.  F was only responsive to pain at this point.  She would not respond to anyone in between, and when a contraction would come it was clear she did not know what was going on.  I helped hold her leg open while gently speaking with her, trying to help her remember that she was in labor and that her baby was about to be born.  J arrived at this point and stood by her head, speaking words of encouragement to her.  The baby began to spontaneously come on his own merit, thankfully.  Everything was in such a rush of motions, that I told the OB that F was anemic and has a history of postpartum hemorrhage.  She sent someone out of the room for the bag of pitocin and an IM medication to administer right after the baby was born.

It only took one huge push for the baby to begin to crown.  He had a nuchal arm that released, and soon the rest of the baby followed.  At 1140am, baby Shawn was born.

Since all of F’s vitals were good, they decided to be safe and just do a quick consult with neurology and cardiology.  They did a CT scan and determined all was normal, and their analysis was that she was just too fatigued from pain.  I am fairly confident that with the anemia, her body tapped out on oxygenation and just could not continue.

F had her previous two boys in different homes, and Shawn was suppose to be born in their new home but their move got delayed.  F had the sweetest outlook when she said that all three of her boys got to be born in a different place after all.

After the baby was born, I helped latch him to F’s breast.  She tried to open her eyes when her son was skin to skin with her.  We cried together as she told me she was sorry her body couldn’t hold on any longer.  I reminded her that God was in control and that He is in control of the labor journey.  Shawn was meant to be born in the hospital and that was how it was suppose to be.

After a good feeding and helping F and J move to their postpartum room, F took a very long nap and began to feel more like herself once she slept.

I admire F and her strength so much.  After two wonderful home births, it goes to confirm why we always prepare for the just in case.  F did a phenomenal job helping to bring her sweet boy earth side.  Not the way we planned, but the way he needed to come.