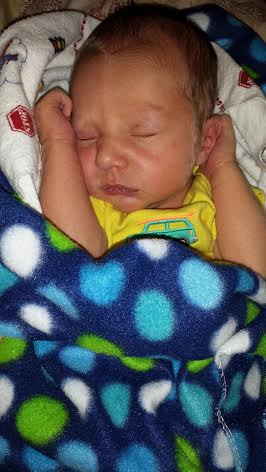 Birth Story of Ulysses (Aka: Rainbows and Butterflies)

A hired me at 10 weeks along in her fourth pregnancy.  A had two previous home deliveries in another state, so was confident in what she wanted for this pregnancy and birth. At 36 weeks, A took the doula training I offer.  It was a wonderful time.  During one conversation, the joke began that when it was time to blog her birth, A wanted me to blog all “rainbows and butterflies.”  So rainbows and butterflies it is. At her 38 week appointment, A requested a cervical check and we were pleasantly surprised to find her 5cm dilated, 80% effaced and baby at a -1 station.  A was not wanting a baby that week as she had several things to finish at work before baby’s arrival.  Her birth history stated she would not go early, so she left that appointment with us saying we would see each other in a week. Two nights later, A calls me shortly after 7pm stating she is pretty sure her water broke.  Her youngest had fallen down the stairs and she swooped him up and went to set him on the table, and as she did she felt her water break. Since she was unsure, I had A do some squats, sit on ball, sit on toilet, etc. to see if trickling continued.  She called again soon to say this had to be her water.  She sits and it comes, and it is not pee.  A decided she wanted to try and get some work done, and then sleep.  We discussed options and A decided she would come see me the following morning at 9am for an assessment if labor had not picked up before then. A arrived at 9am, happy and laughing.  We did an assessment and confirmed her water was broken, she was 5/90/0 in regards to her cervical check, and her little guy was in a posterior position.  A already had planned to see her chiropractor later that day, but with the baby in a stubborn position and needing labor to begin, she agreed to leave my office and go straight to the chiro.  A had a webinar that afternoon at 1230 that she was convinced she could do.  I told her I would be at her house no later than 130 to work on natural remedies to get labor going if she kept her webinar on. During the cervical check, I was able to get some fluid pockets out, that seemed to help with contractions.  A had a few good contractions before leaving my office, which continued on her drive to the chiro.  Upon arrival, she decided the webinar needed to be rescheduled.  There was no way she would do it. A got adjusted and called me as she was arriving home saying it was time to come.  Contractions were definitely regular and stronger now. I arrived at 1245 to find A pacing her living room.  She was excited that things were kicking in and ready to meet her baby.  J, her hubby, was busy getting the house ready.  A had previously delivered her babies in the living room, and that was the plan this time.  J set out the big tarp for the living floor to protect it for delivery. Contractions were coming every 3 minutes, and lasting over a minute long.  It was a surprisingly lovely day for Houston in May, and A decided she wanted her back door open.  A lovely breeze passed through the living room, and the sun shined in.  A joked that it felt like a Disney movie and she was expecting birds to fly in, squirrels and rabbits to hop in upon delivery. Within an hour, A changed to lean over the ball.  She was beginning to lightly moan through contractions.  J was doing counterpressure with each wave of a contraction.  In between, A laughed and chatted.  At one point, A asked to see the Hee Hee Hoo Hoo video for a good laugh.  (It is a must watch!) As 2pm rolled around, A got off the ball.  She stood and squatted with contractions.  Soon she moved back to leaning on the ball, which she kept stating how much she liked the ball this labor. Within thirty minutes, A mentioned she was feeling pushy at the peak of contractions.  I reminded her to wait until it was unbearable, she would be there soon. As quarter of three neared, J told me her was going to have to run out to pick up their oldest boy from school at three.  It was bad timing for everyone, with A feeling pushy and school pick up happening at the same time.  A was strong and matter of fact about the situation and told her hubby to hurry. For the next forty minutes, A alternated between standing, squatting and hands and knees position;  listening to her body and doing what it commanded with each surge.  Each contraction, A became more serious, more moaning.  I watched the clock, praying J made it back in time to be there for the birth.  It was evident by A’s actions that birth was close. At 3:30 exactly, J walked into the house.  At the same moment, A began to spontaneously push.  The head was birthed 90 seconds later, followed by the body.  In one swift push, A birthed her baby as her husband walked into the living room.  As A took her sweet baby in her arms, she looked at J and said, “I didn’t want to wait.  I kept telling myself not to wait.”  How amazingly powerful our minds are! A birthed her placenta, and then we moved to the bed room.  Baby latched to the breast easily.  Couldn’t ask for a more beautiful birth and lovely postpartum period. Welcome to the world sweet Ulysses.  Born on May 15, 2014 at 3:32PM, weighing in at 7.4#, 19.25″ long.  He is so loved and cherished by his three older siblings.  So honored to have been part of this sweet boy’s birthing day.