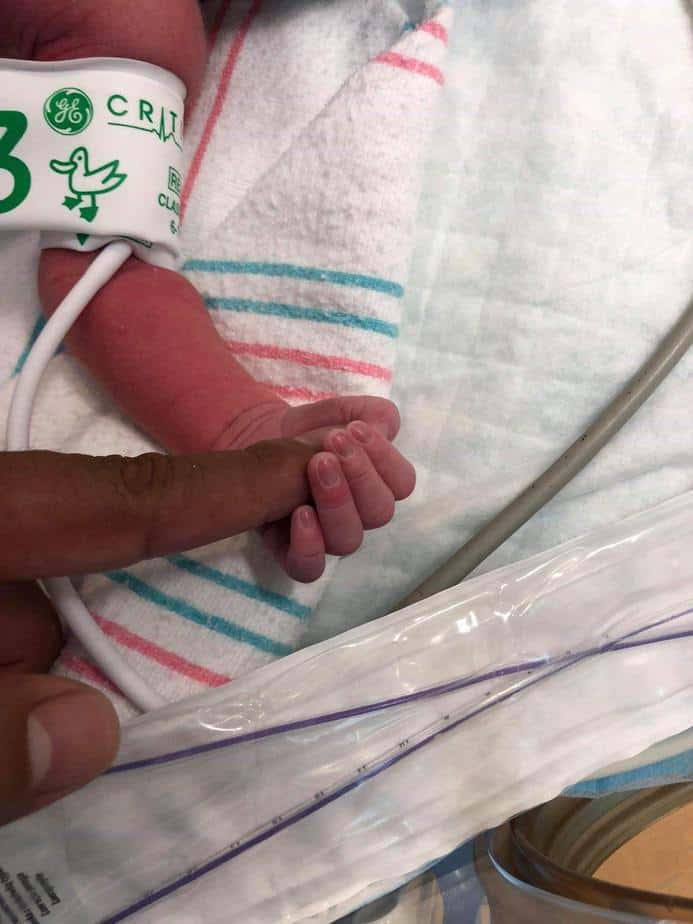 K and M started care with me in the first trimester of their fourth pregnancy.  K had her previous baby at home with me, and we fully anticipated this little one to be born at home as well, but sometimes you are thrown a curve ball in there.  You can read about K’s previous journey here.

In the late afternoon of October 1 at 33.5 weeks pregnant, K sent me a text letting me know she was not feeling well and had gotten an off reading on her home blood pressure cuff.  I had her meet me at my office that evening.  I saw her, and things looked like they were heading towards pregnancy induced hypertension, if not pre eclampsia.  Since it was too late to send off labs, I sent K with forms to get blood work done the next day with instructions to go on bed rest and begin things to reduce blood pressure issues.

The morning of October 3rd, K went to acupuncture to help blood pressure, and had a great reading at the office before she left.  She had not been home long, when she got up and was bleeding heavily.  She called me, and I instructed she needed to immediately go to the hospital.  M was closer than an ambulance, and got her to the hospital within 15 minutes.

I arrived at the hospital a little before 230pm, and just before the ultrasound.  The hospitalist pulled me out side and caught me up with his thoughts and wanted my opinion.  Bleeding was heavy, but he did not have enough information yet to make a decision since baby looked great and she was 34 weeks.

Unfortunately, a student sonographer was sent up to do the ultrasound.  It was debated whether it was a placenta or clots presenting in front of the baby’s head.  We waited for the head sonographer to arrive.  She came and started to look at baby.  K said she felt like she was leaking, and then we saw a large amount of fresh blood appear on the ultrasound and the confirmation of a bunch of clots presenting before the head.  It was called a placental abruption, and they immediately took K back for an emergency cesarean.

Daniel was born on October 3rd, 2018 at 308pm, weighing in at 5lbs 4ozs, 19″ long.  He was taken to the NICU, where he stayed for 12 days until he could handle better being earth side.  K has had amazing strength as she recovered from major surgery, kept up with a pumping schedule, and the back and forth from the NICU to the home.

It was not the birth K wanted or had been planning for baby Daniel’s journey, but we are all so thankful that he was born safely, and are thankful for the wonderful staff at the NICU where he stayed who took good care of him while he worked on getting stronger and ready to go home.